(Aditya Shaw, Intern Journalist) History- India and China share an unmarked border that is more than 3,488km (2,100 miles approx) long and both countries claim over some overlapping territories. Since last month the Indian and Chinese armies have been in a stand-off at three locations along the Line of Actual Control (LAC) the Galwan River Valley, Hot Springs area, and the Pangong Lake. The Galwan river is the highest ridgeline which gives China the edge to dominate the Shyok route passes, which are close to the river. It lies along with the western sector of the LAC and close to Aksai Chin, a disputed area claimed by India but controlled by China. 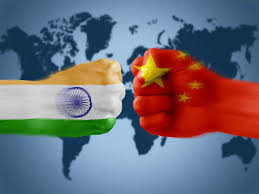 What is Line Of Actual Control (LAC)?

The LAC is the demarcation that separates Indian controlled territory from Chinese-controlled territory. For India, the LAC is 3,488 km long, while China considers it to be only around 2,000 km. It is divided into three sectors: the eastern sector which includes Arunachal Pradesh and Sikkim, the middle sector in Uttarakhand and Himachal Pradesh, and the western sector in Ladakh. LAC in the eastern sector consisting of Arunachal Pradesh and Sikkim is called the 1McMahon Line which is 1,140 km long.

The McMahon Line was a negotiation between India and Tibet under Simla Convention of 1913-1914, without the participation of the Chinese government and China considers the McMahon Line illegal and unacceptable.

Border disputes between India and China:

Western Sector or Aksai Chin Sector: The region is claimed by the Chinese government post-1962 war as an autonomous part ofXinjiang region which is originally supposed to be the part of the Indian state of Jammu and Kashmir.

Central Sector: It is the less disputed section of the Indo-China border but recent Doklam standoff and Nathu La Pass trading issues have brought distress at all levels.

Eastern Sector or Arunachal Pradesh: Here China has been claiming the Tawang valley and nearby area as their own. Even as India and China are engaged in military-level talks and in controlled engagement, there has been a violent face-off between the army troops of both sides.

Recently, Chinaʼs Peopleʼs Liberation Army (PLA) and the Indian Army clashed and used stones, knives, and machetes to attack each other and this resulted in fatalities on both sides. This incident happened at Galwan Valley in the Eastern Ladakh region.

scraped Article 370, which gave special status to Jammu and Kashmir. After the abrogation of Article 370, two separate Union Territories have created–first Jammu and Kashmir and second Ladakh. China opposed this decision of the Central Government and stated that it has always opposed to Indiaʼs inclusion of the Chinese territory (Ladakh) in the western sector of the China-India boundary into its administrative jurisdiction. Recently, India has continued to undermine Chinaʼs territorial sovereignty by unilaterally changing its domestic law. Such practice is unacceptable and will not come into force. The matter was taken to the UN Security Council where India clarified its stand on scraping the Article 370 and cities it as India’s internal matter.

4-China’s Criticism at the International level-China is facing wide criticism due to its internal politics and secondly due to the COVID-19 pandemic.

Recently, China passed the Hong Kong National Security Law which faced wide criticism both at the internal and international levels.

Following Lieutenant General talks that concluded on June 6 between India and China, symbolic disengagement took place in an attempt to resolve the months-long border standoff in the Eastern Ladakh region.

After the token disengagement, the Chinese came back again mid-week and erected up a fresh tent, just in 2 days of the disengagement plan agreed between the two Generals. A brawl ensued between the soldiers of the two armies which resulted in the incineration of the Chinese tent. The Chinese troops returned only to come back with a larger platoon of troopers over the weekend. Stone pelting took place between the two sides on Sunday, June 14. Violent clashes broke out on Monday (June 15) evening at the brink with a high gorge towards the Galwan river. According to the sources, skirmishes intensified and many Indian soldiers jumped into the valley in a bid to save themselves. The military confrontation between the Indian and Chinese troopers took place a day before the Major Generals of the sides were going to meet to take the disengagement plan further ahead. As the Chinese refused to back off, an unarmed team of patrol led by Commanding Officer Colonel Babu of the 16 Bihar Regiment set out to discuss with the Chinese counterpart. However, the Chinese held their ground and refused to honor the agreed disengagement plan between the Lt Generals on June 6. The Chinese side deliberately stoked the situation by attacking the unarmed Indian patrol team with boulders, stones, iron rods, clubs wrapped in barbed wire, and wooden logs with nails around them. The Indian team retaliated. The Indian military sources confirmed that no firearms were used in the clashes and that most of the injuries sustained were due to the stone-pelting and the use of iron rods by the Chinese side.

The CO of the 16 Bihar Regiment sustained serious injuries in the initial attack by the Chinese troopers. He,along with an injured

havaldar was immediately rescued and

taken back, leaving behind the injured soldiers, who were taken captive by the Chinese side. After a hiatus of 40 minutes, a Major led the

same unit to the site and mounted an attack against the Chinese intruders. Things escalated precipitously from that point onwards.

The Indian troops attacked the Chinese soldiers with brute power and inflicted serious life-threatening injuries to about 55 Chinese soldiers. The bloody brawl resulted in many casualties on the Chinese side but the sources informed that the exact number of fatalities cannot be determined. The fighting was happening near the ridge and many of the soldiers perished after being pushed down the brink into the fast-moving Galwan river. The Indian unit was massively outnumbered by the Chinese, according to the sources. This is the moment when several casualties on the Indian and Chinese sides happened. Sources also inform that there was a brigadier-level Chinese officer on the post waving for peace and asking the two sides to stop the clashes. Fierce fistfighting continued late into the night and stones, metal clubs wrapped in barbed wire were used, resulting in head injuries to many. The clash continued for about 3 hours. Fighting halted well past midnight. Bodies of the soldiers were fished from the river while many injured succumbed to their injuries by morning, sources said.

Following the violent clashes between the Indian and Chinese forces, the multiple Colonel-to-Colonel-level talks from both sides happened at the very same post during the day. The Indian Army has now takenover the control of the Indo-Tibetan Border Police (ITBP) posts.

World Environment Day- Making The World A Better Place To Live In!

Covid-19 cases crossed over 6 lakhs in India, What’s next?